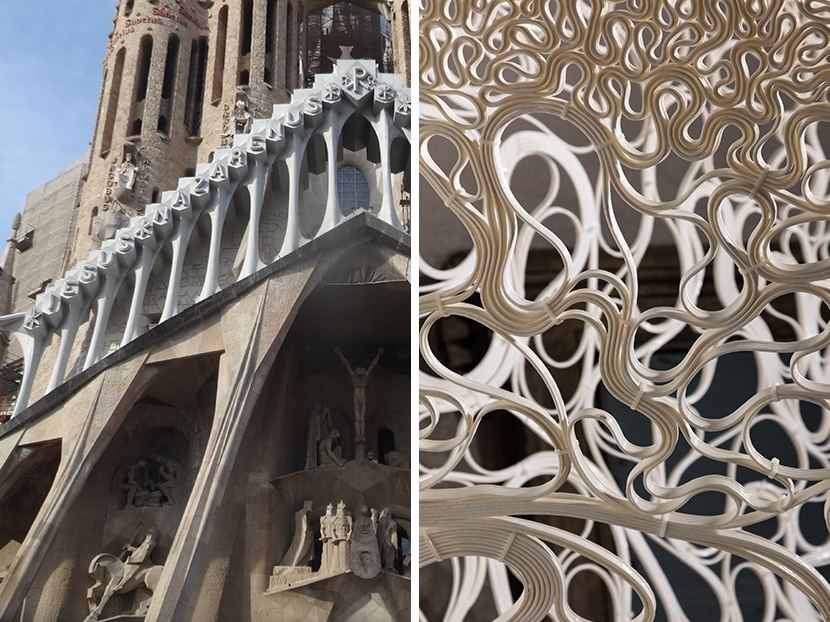 At this year’s CONVERGE, a conference exploring the intersection of design and technology, I was deeply impressed and inspired by the almost TED-like talks on the subject.

We started with a fascinating peak in the kitchen of ZHA CoDe, the computational design research group at Zaha Hadid architects.
The organic lace of ‘Thallus’, an experimental sculpture made by a single continuous extruded strip, showed the potential of robotic 3D printing and computational geometry generation.
I really have to get started with Grasshopper again…

Continuing with the Sagrada Familia, Gaudi’s famous basilica in Barcelona, the concept of topology optimization and how it was achieved in pre-computer times was just as awe-inspiring.
Optimizing a form regarding to its own weight and force distribution resulted in almost organically grown structures. Ultra-thin columns transform the cupola into a light and airy canopy, void of side beams or any other conventional support structures.
Once the logic behind the unusual design became clear, it wasn’t anymore just exuberant decoration to me but a rather clever approach to structural analysis.

These are just two examples of a series of great talks at CONVERGE 2017.
What impressed me most was the quite aesthetic impact of topology optimization and the fascinating opportunities of generative design.

Looking forward to implementing these insights and inspiration to my upcoming projects!

This site uses Akismet to reduce spam. Learn how your comment data is processed.

﻿
This website uses cookies to improve your experience. We'll assume you're ok with this, but you can opt-out if you wish.AcceptReject Read More

This website uses cookies to improve your experience while you navigate through the website. Out of these, the cookies that are categorized as necessary are stored on your browser as they are essential for the working of basic functionalities of the website. We also use third-party cookies that help us analyze and understand how you use this website. These cookies will be stored in your browser only with your consent. You also have the option to opt-out of these cookies. But opting out of some of these cookies may affect your browsing experience.
Necessary Always Enabled
Necessary cookies are absolutely essential for the website to function properly. This category only includes cookies that ensures basic functionalities and security features of the website. These cookies do not store any personal information.
SAVE & ACCEPT